Konkola Copper Mines (KCM) is a leading Zambian integrated copper producer, which operates underground mines and open pit mines as well as metallurgical plants with operations located on one of the highest-grade copper seams in the world at Nchanga, Konkola, Nkana and Nampundwe.

The Company seeks to be a role model for safety, environment and socio-economic development, while playing a key role in making Zambia one of the world’s leading copper producers.

Since Vedanta Resources plc acquired KCM in 2004, more than $3 billion has been invested to upgrade equipment, build new facilities and expand capacity. These investments have increased reserves, resources and extended the life of the mines by over 50 years. Notable investments include:

KCM is one of Zambia’s largest private sector employers, with nearly 12,000 workers, of which11 percent are women. KCM strongly believes that employee growth and development is a critical component for future success. The company has a long-standing, cross-functional employee training and development progamme, which includes secondment to Vedanta’s international operations and participation in well-structured development courses. KCM has sponsored over 600 students in full-time degree progammes at universities in Zambia and abroad.

KCM recognizes that its operations and future prospects depend on the communities in which it operates. The company takes an active role in improving the quality of life of the local population, providing support in areas such as health, education, sustainable livelihoods and sport.

KCM understands that mining operations have various implications for the environment and has carried out a series of actions to address legacy environmental issues. The company continues to invest in clean technology for a sustainable environment. Notable investments include:

KCM complies with the Vedanta Sustainability Framework, which is underpinned by the ICMM/IFC/OECD principles, as well as statutory requirements of the Zambia Environmental Management Authority (ZEMA).

The Mining Sector in Zambia

Zambia is ranked as the world’s sixth largest producer of copper, generating nearly 5% of the world’s production, and is the fifth largest global producer of cobalt (6%). The industry employs over 60,000 people within Zambia. Mining accounts for around 80% the country’s export earnings.

ZCCM Investments Holdings Plc (ZCCM-IH) maintains a 20.6% shareholding in KCM. ZCCM-IH is one of Zambia’s prime investment holding companies with the majority of its investments in the copper mining sector of Zambia. It is quoted on the Lusaka, London and Euronext Stock Exchanges. The company’s shareholders are the Government of the Republic of Zambia (GRZ) with 87.6% shareholding and private equity holders with 12.4%. Minority shareholders are spread throughout the world in various locations. 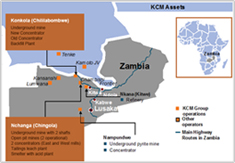 Konkola Copper Mines Plc (KCM) is one of the leading integrated copper producers in Africa,