Our mining operations in Zambia are located in the Copperbelt and Central Provinces, and include open pit mines, underground mines, tow concentrators, a leach plant, a state-of-the-art flash smelter, a modernized refinery and a sulphuric acid plant. KCM recently sank Zambia’s first post-independence era mining shaft as part of the Konkola Deep Mining Project (KDMP). This 1,505 metre shaft has ensured KCM’s longevity, by allowing for the access of the deep Konkola ore body and extending the mine life by over 25 years.

KCM is currently one of the largest private sector employers with over 13,000 employees.

The state-owned mining company Zambia Consolidated Copper Mines Investment Holdings (ZCCM-IH) is the other shareholder in KCM, controlling a 20.6% stake in the company. KCM enjoys a strong relationship with the Zambian government and is a committed partner in improving the economic prospects of the country through our operations and other activities.

The company operates two hospitals and 14 satellite clinics. KCM also runs two schools, which it has expanded from primary level to full secondary level, providing education to over 2,000 pupils. KCM has one of the largest malaria roll-back programmes in Zambia. The company has rolled-out several community health initiatives that include the distribution of 23,000 free eye glasses, the fitting of artificial limbs and undertaking eye cataract operations. KCM is also involved in the sponsorship of two football teams in the top-tier Zambian soccer league. 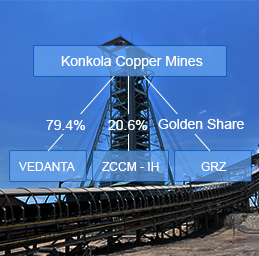 Vedanta Resources holds 79.4% of the issued and outstanding ordinary shares of the Company. The remaining 20.6% interest in the Company

KCM has two major Open Pits mines with satellite pits at Nchanga and 3 underground mines namely; Nchanga mine in Chingola, Nampundwe mine in Central province and Konkola in Chililabombwe.

In recent years, KCM has undertaken a comprehensive upgrade of all of its surface plants. These include:

In recent years, KCM has undertaken a comprehensive upgrade of all of its surface plants. These include: 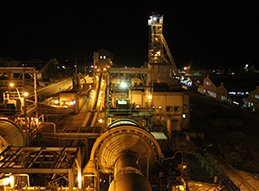 KCM's products are primarily exported to the Middle East, Asia, Europe and within Africa.