In partnership with the Ministry of Education in Chililabombwe district, Konkola Copper Mines (KCM) provides scholarships to students in government schools to promote academic excellence.

With the help of the Ministry of Education, the top performing pupils in each of the above mentioned districts are identified to receive scholarships. Over 105 scholarships have been provided since 2010 to the top performing pupils in the grades seven and nine national examinations in Chingola, Chililabombwe, Kitwe and Nampundwe districts. The scholarships cover the cost of school fees up to the next examination year, i.e. from grades eight to nine and grades ten to twelve. 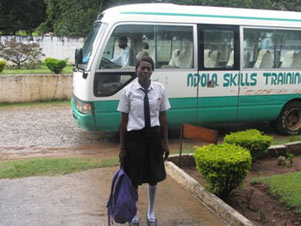 Riflent at her new school in Ndola. 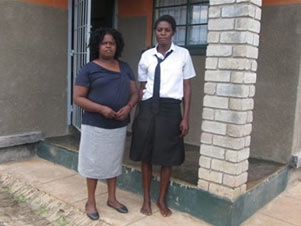 Riflent with her aunt at Ndola Girls Technical School
"I am very grateful to KCM for coming to my aid, because with this scholarship, the dream of fulfilling my ambition will come true"

Coming from a humble family with limited resources in the Mang’unza area of Mapanza village in Choma district, it looked like all odds were against Riflent Mweemba. However, the determined young lady did not allow these circumstances to tamper her dream.

When Riflent started grade 1 her ambitions were to become a nurse after completing school. Unfortunately, by the time she qualified for grade 8, she was forced to drop out of school as her parents were unable to afford paying for her school and to sponsor her elder brother at University of Zambia to complete his engineering programme.

Riflent had no option but to relocate to Lusaka in an effort to try to start a business and raise enough funds to pay for her return to school. While in Lusaka, she married and had two children. One child sadly passed away while the other child is now living with her grandmother in Choma.

After her marriage failed, Riflent moved back to Chililabombwe. Determined to become a nurse, she enrolled in night school at Ming’omba Basic School and wrote the Junior Secondary School Leaving Examination (JSSLE) for grade 9.

When examination results were released, Riflent had the second highest result in Chililabombwe district and was awarded a scholarship from KCM for her grade 10 to 12 studies at Ndola Skills Training Centre.

As part of KCM’s safety, health and environment programme, we follow the highest measures of safety in our mines and process plants.

As one of the largest mining companies operating in Zambia, Konkola Copper Mines (KCM) strives to ensure that the impact of our investment...